John Boehner Was Once ‘Unalterably Opposed’ To Marijuana. He Now Wants It To Be Legal

John Boehner Was Once ‘Unalterably Opposed’ To Marijuana. He Now Wants It To Be Legal. John Boehner has been known to enjoy the occasional adult beverage. He famously nicknamed his negotiations over raising the nation’s debt ceiling in 2011 the “Nicorettes and Merlot sessions.” Nicorette because that’s what President Obama would chew during the talks. Merlot because that was the drink of choice for the former speaker of the House.

These days, the Ohio Republican has expanded his view of what should and should not count as a socially acceptable vice. He’s no longer just a wine enthusiast. Rather, he’s emerged as one of the most vocal advocates in the GOP for marijuana legalization.

To be sure, Boehner says he has never tried marijuana. “I’ve never used the product. I really have no plans to use the product,” he told host Michel Martin in an interview for NPR’s All Things Considered. “But if other people use the product,” Boehner said, “who am I to say they shouldn’t?”

His embrace of marijuana legalization marks a sharp reversal for Boehner since his time in Congress. In 1999, in his one and only vote on the issue, he voted to prohibit medicinal marijuana in Washington, D.C. In 2011, he wrote a constituent to say he was “unalterably opposed to the legalization of marijuana.”

But since his retirement in 2015, Boehner’s position has evolved. Last April, he joined the board of Acreage Holdings, a publicly-traded cannabis company based in New York. And on Friday, he appeared at the South by Southwest festival for a keynote on legalization. 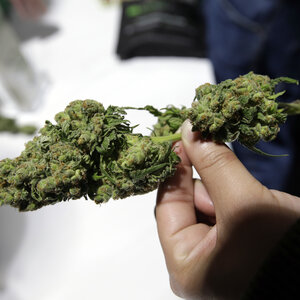 “I feel like I’m like your average American who over the years began to look at this a little differently and I think over the last five years my position, it has kind of softened up and softened up,” Boehner said.

Part of this shift, he said, has been driven by conversations with veterans who have turned to marijuana to ease their suffering from chronic pain or post-traumatic stress disorder. However, due to federal prohibitions, efforts to study the drug as a possible alternative to opioids and anti-depressants have been hampered at the Department of Veterans Affairs.

“I started to reach out to some of my friends, neighbors and others,” Boehner said. “And I thought, ‘You know, there’s more interest in this than I would have guessed.’ ”

Despite his about-face, Boehner said he had no regrets about his past position on the issue — in particular, what it meant for the criminal justice system. As Quartz reported last year, more than 400,000 people were arrested for marijuana sales or trafficking during his time as time as speaker from 2011 to 2015.

“I don’t have any regrets at all,” Boehner said. “I was opposed to the use of it. The whole criminal justice part of this, frankly, it never crossed my mind.”

Boehner’s reversal has mirrored a wider shift in the nation at-large. Today, 34 states and the District of Columbia have approved the use of marijuana for either medical or recreational purposes, according to the National Conference of State Legislatures.

Within Boehner’s own party, support is more tepid. In the Pew survey, just 45 percent of Republicans felt marijuana should be legal.

Asked about attitudes within the GOP, Boehner said, “States have spoken up, and I think even Republicans in Congress would recognize it’s time for Washington to get out of the way.”

Boehner said that a proposal introduced in the Senate by Elizabeth Warren, D-Mass., and Cory Gardner, R-Colo., “would solve a lot of problems for companies trying to operate” in states where marijuana is now legal. The measure, known as the STATES Act, would protect marijuana users and businesses in these states from federal interference.

He said the Food and Drug Administration should also reconsider its classification of marijuana as a Schedule I drug. The classification, which puts marijuana in the same category as heroin and LSD, has stymied efforts to study the potential health benefits of the drug.

Boehner said he’s not fazed by this relative lack of research, or by concerns that legalization would make it easier for heavy users to abuse the drug.

“It can be used to excess, and likely will,” he said. “But that doesn’t mean that we should take wine or liquor off the market, or beer or cigarettes for that matter. And I do think that by decriminalizing, you’re going to open up a lot more research so we can learn more about the 4,000 year history of the use of this plant.”

This story was produced and edited for broadcast by Dustin DeSoto, Lilly Quiroz and Martha Wexler.